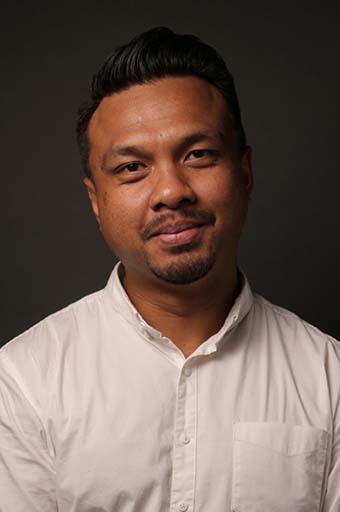 After a 4-year stint in Dubai’s media industry, Andy Idris joins The Moving Visuals Co. to spearhead our Malay production department. Among his credits, he has worked on the uber successful Cantik Detektif (Beauty Detective) as well as Long Qiam Pass – a Children’s drama series.

Following a graduate program with the New York Film Academy, he worked with leading production companies on numerous commercial projects – for Porsche, Google, Dubai Tourism Board, Chevrolet and McDonald’s amongst others. He has also written and produced Singapore Airlines’ 70th Anniversary and the Singapore Embassy’s National Day event videos in UAE.

In 2006, Andy’s TV career kicked off with hosting and acting in Anugerah Skrin, Suria’s talent search reality series, where he was runner-up. Since then Andy has appeared in several local drama series like Satu Raya Tiga Cinta for Suria, as well as regional collaborations with RTB (Radio Television Brunei).

Besides appearing on-screen, Andy has written for dramas, factual, magazine and entertainment programmes. Among them, Follow Fasha, a social media series which he created and wrote, was lauded in the Public Advisory Committees (PACs) list for blending educational elements with drama.

When he isn’t glued to his Macbook, Andy enjoys hunting for vintage items online; thinking about his next Instagram caption or what to eat. He is currently searching for a Vespa to ride to work as well as thinking of more stories to bring to life on TV and other media platforms.